How to Avoid Coupon Fraud

How to Avoid Coupon Fraud

These…are not terms of endearment. To know of someone described in these terms is to want to run away in the opposite direction as fast as possible. At least we would hope so.

Fraud is theft. It happens in all sorts of ways. For our purposes, let’s take a closer look at Coupon Fraud. Manufacturer’s Coupon Fraud occurs when consumers act against the terms listed on retailer’s coupons or advertisements. This includes redeeming the coupon for more than it is intended value or – and this is where Outta The Box can help – when consumers make copies of coupons.

In the promotion business, Outta The Box clients are absolutely worried about coupon fraud, and rightfully so. A promotion can cost thousands of dollars, and countless hours of tracking and analyzing data after the promotion ends. People who would take discounts they don’t deserve or use coupons in a dishonest manner are breaking the law. No if, ands, or buts about it.

Let’s take one quick step back for reiteration purposes. Coupon promotion is big business. Retailers want to draw people in, and they are always looking for ways to provide an incentive to do so. One way to provide an incentive is to make a deal. People love deals. In fact, 97% of consumers look for a deal when they shop. (Hey, what’s up with that other 3%?) So, said another way, making a deal is big business.

Fraud isn’t just in the gangster movies with Robert DeNiro. It happens in real life, and more than you might think. In fact, it’s estimated that coupon fraud cost businesses between $300-$600 million per year in the US alone!

Copying a coupon would be so easy, right? Especially with the printing capabilities and technology today. This is Coupon Fraud…punishable by up to 20 years in prison. 20! Yet, consumers do it. All in the name of saving a few bucks on Tide detergent.

Outta The Box is fighting against this fraud. John Bongiorno, Vice President of Sales and the man behind the Box (and a man who uses more coupons himself than you can even imagine), has a solution.

The Void Pantograph is a printing solution Outta the Box offers on coupons, which is an invisible-to-the-eye print that becomes visible when photocopied. The imprint around the coupon’s barcode deters fraud with the appearance of the void pantograph. This upgrade is free to retailers and manufacturers. 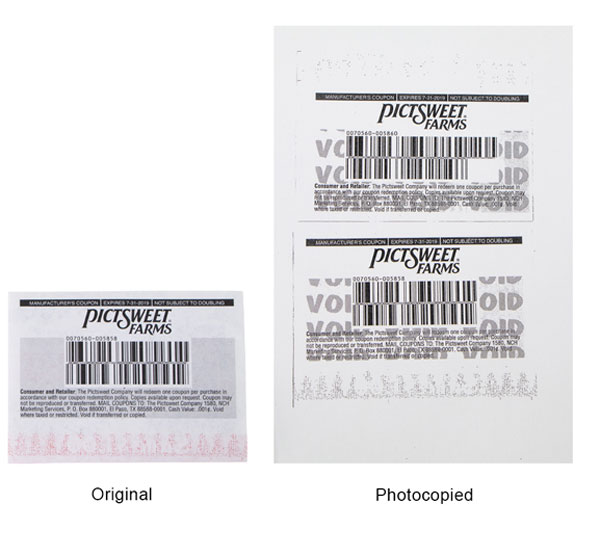 To learn more about the Void Pantograph, and other ways to protect your next coupon promotion, contact John at sales@outtathebox.com.